Many theories exist as to the origin of the name “Cole,” which is so prominent in Boonslick area history. According to one, the name was derived from the Latin “Coelus” or “Coel” meaning “a sacred or heavenly person.” Another purports that “Cole” was a shortened version of “Agricola,” which means “a tiller of the soil”.

Whether these theories are true or not, many early settlers in Boonslick country may have seen “a sacred or heavenly person” and “a tiller o the soil” in the personage of Hannah Cole, believed to be the first white woman to venture south of the Missouri River. Many historians have portrayed Hannah Cole and her family as courageous leaders in the pioneer days of this area.

Hannah Allison and William Temple Cole were married in the late 18th century in Virginia. In 1805, the couple, along with Stephen Cole, who was William’s brother, and his wife, Phoebe, who was Hannah’s sister, emigrated to Wayne County, Kentucky.

The two Cole families were among those who established a settlement on Loutre Island in the Missouri River in 1807. This island was situated at the mouth of Loutre Creek, nearly opposite the mouth of the Gasconade River and not far from the site of Hermann, Missouri.

In 1810, a band of 10 Sac and Potawatomie Indians stole seven horses from the Loutre Island settlers. The Cole brothers among those who volunteered to pursue the Indians. Two nights later, the volunteers stopped to camp for the night and were ambushed by Indians as they slept. William Cole and others were killed. Stephen Cole is said to have killed four Indians and wounded a fifth and sustained 26 wounds before he escaped and found his way back to Loutre Island.

A month later, Hannah Cole, widowed and nearly 50, and her nine children, Jennie, Mattie, Dykie, Nellie, James, Holbert, Stephen, William and Samuel, and Stephen Cole, his wife and five children, accompanied a group of men led by Benjamin Cooper on an overland journey into the wilderness.

When the group arrived at a point opposite Boonville on the north side of the Missouri River, it was decided to establish a settlement there. For some reason, however, the two Cole families ventured further and crossed the Missouri River to the south side. 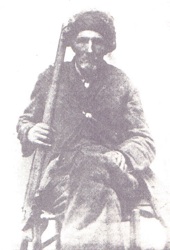 Samuel Cole, pictured above, youngest son of Hannah Cole, tells how the family settled in 1819. He was nine years old at the time and lived well into his eighties.

O.P. Williams’ History of Cooper and Howard County, published in 1883, contains his account of the crossing as told by Samuel Cole, Hannah Cole’s youngest son, at age 82:

The river was running full of ice. We halted our team about where old Franklin was built afterwards and came over the river in a piroque (hollowed out logs), leaving our wagon on the other side and swimming our team.

After arriving on this side we continued our journey for about a mile east of the present town of Boonville and stopped at the old site of Hannah Cole’s fort, where we remained.

The river continued to be so full of ice and was so swift that we could not return to the opposite shore for eleven days. We had nothing to eat but some acorns, slippery elm bark and one wild turkey.

As soon as the ice had somewhat disappeared, we got into the piroque and recrossed, but the current and ice carried us two miles below before we could make a landing. After doing this we slowly worked our way up the other side, reaching the point where we had left our wagon. It was very difficult to work our way back. We took the wagon apart, the boat not being large enough to carry it any other way.

The first shelter they constructed was thought to be a cross between a hoop cabin and an Indian bark hut. Eventually a real cabin was raised. The cabin was of round logs notched together at the corners, ribbed with poles and covered with boards split from a tree. The one room cabin featured a fireplace, puncheon floors, a clapboard door, a window, sometimes covered with greased paper, and furniture hewn from trees.

For nearly two years the two Cole families remained without neighbors. Samuel Cole recalled that among the activities were raising corn crops in 1810 and 1811 and tending it with a cow hitched up to a plow.

In the fall and winter of 1812 other families settles on the south side of the river. For protection from potential Indian attacks, the first Cole fort was erected under the direction of Stephen Cole. The fort was located north of the Boonville and Rocheport road, east of the present site of Boonville. The settlers came to the fort for protection from the Indians, who were stealing horses, driving off cattle and murdering settlers caught off guard.

At one time during the summer of 1812, the fort was surrounded by about 400 Indians. The Indians considered themselves allies with Great Britain after that country had declared war on the United States. The settlers did manage, however, to get out of the fort and escape to Fort Kincaid across the river in a keel boat that had been captured the previous day.

Not to be discouraged, the Coles and their neighbors returned to their abandoned homes in the spring of 1813 in order to raise crops.

By December, 1814, the settlers on the south side of the river had become so concerned for their own safety in the wake of killing by Indians that they gathered at the home of Hannah Cole to build a fort larger than the first Cole fort. The new fort site was considered more advantageous and more easily defended and was in such a location that water could be drawn from the river by way of a windlass.

Although the fort was completed in a week, the immediate need for protection from Indians became less and less as time went on. Indian troubles began to die down as peace was established between the United States and Great Britain. The Indians also began to realize they could not drive the settlers from their homes, so they moved farther west.

The fort did serve many other useful purposed. Peter Woods, a Baptist minister and Indian fighter, conducted the first worship service on that side of the river in Hannah Cole’s cabin in 1811, and the fort continued to be a central place for worship services by circuit ministers.

The first county seat of Howard County, which at that time included what now comprises 43 counties and parts of seven other counties in Missouri and some in Iowa, was at Hannah Cole’s fort from 1816 to 1817. The first circuit, county and probate court sessions were held there July 8, 1816. David Barton, who would become one of Missouri’s first senators, presided over the county court’s first session.

In the same year Hannah Cole became one of Missouri’s first businesswomen as she was granted the first license to operate a ferry at Boonville.

In 1817, Hannah Cole’s cabin served as the first schoolhouse in the area and was among the polling places used in the general election of 1819. The fort also served as a post office, hospital, community center, gathering place for hunters and a place to cast bullets for flintlocks at one time or another.

Although the town of Boonville was laid out in 1817, the first lots were not sold until 1819, after Cooper County was organized. Hannah Cole had tried to obtain the right to purchase land in the area as early as 1810, but could not do so since at that time the United States had not yet acquired the land from the Indians.

On January 23, 1819, Hannah Cole entered claims on tracts of land of 110 acres and 130 acres encompassing the northern part of the city of Boonville. She paid $120 down and was to pay $120 per year for the next three years.

For some unexplained reason, however, she sold the land just two days later to Byrd Lockhart and Henry Carroll for a trifle sum. It had been said that she did not realize that she had deeded all her land rights away. This is one of the first deeds recorded in Cooper County.

Of the nine Cole children, Samuel is the one most often mentioned by historians. Although he was only nine years old when he journeyed with his family to Boonslick country, he is frequently mentioned for such exploits as shooting his first deer where the Cooper County Courthouse now stands; for hunting with Indian warrior, Blackhawk, who later became a noted chief; and for riding a bull in his long tow shirt to a dance and swimming back downstream to the fort while holding onto the bull’s tail.

An avid hunter himself, Samuel Cole recalled at age 82 that during the Cole family’s first winter here “Daniel Boone came to see us, or rather stopped by at our house on his way home to Nathan Boone’s, his son. Daniel Boone had been at the mouth of the Lamine River trapping and hunting…He was a cousin to my father. I knew him well and saw him a great deal while we were in Osage country. He was afflicted with rheumatism and would ask me to rub his back, which I always did. This hunting and trapping expedition to the mouth of the Lamine was the last the old man ever took.”

In 1825, Hannah Cole moved to a cabin 13 miles south of Boonville and lived there with her slave, Lucy, until her death in 1843 at age 89. In 1932, the Boonville chapter of the Daughters of the American Revolution, known as the Hannah Cole chapter, completed the restoration of the Briscoe cemetery along Highway 5 in which Hannah Cole is buried.

The marker for Hannah Cole’s grave, erected by the Pilot Grove D.A.R. chapter, pay tribute to “the first white woman settler of Cooper County whose unfailing courage in facing the dangers of a wilderness and a cruel Indian war entitle her to be called a pioneer mother of early Missouri civilization.”